Gaming phones are out of good ideas. Each one that I’ve tried is a slightly different take on an exorbitant design, of course. But it’s just a couple of companies making powerful yet very similar (and, apparently, sometimes very fragile) phones that aren’t really worth the effort of tracking down — even for the most die-hard of mobile gamers. Yet so far Xiaomi’s Black Shark gaming brand may be the first that has resorted to titillation to stand out.

The Black Shark 4 Pro is the first phone I’ve seen that has a busty digital assistant packed inside that wants me to engage with it in ways I never could (and never wanted to) with the Google Assistant, Siri, Alexa, or Cortana. Meant to be a kind of assistant that helps with getting you acquainted with this phone’s many settings, the anime Shark Chan character is a feature that stands out on an otherwise ho-hum gaming phone. And, while I’m not a fan of the execution (more on that in a bit), it’s nice to have a gaming phone that’s at least attempting to have an identity — anything besides what’s already been done several times, like including high refresh rates panels, ludicrous amounts of RAM, and an extra USB-C port for connecting proprietary accessories, including controller grips or cooling fans. 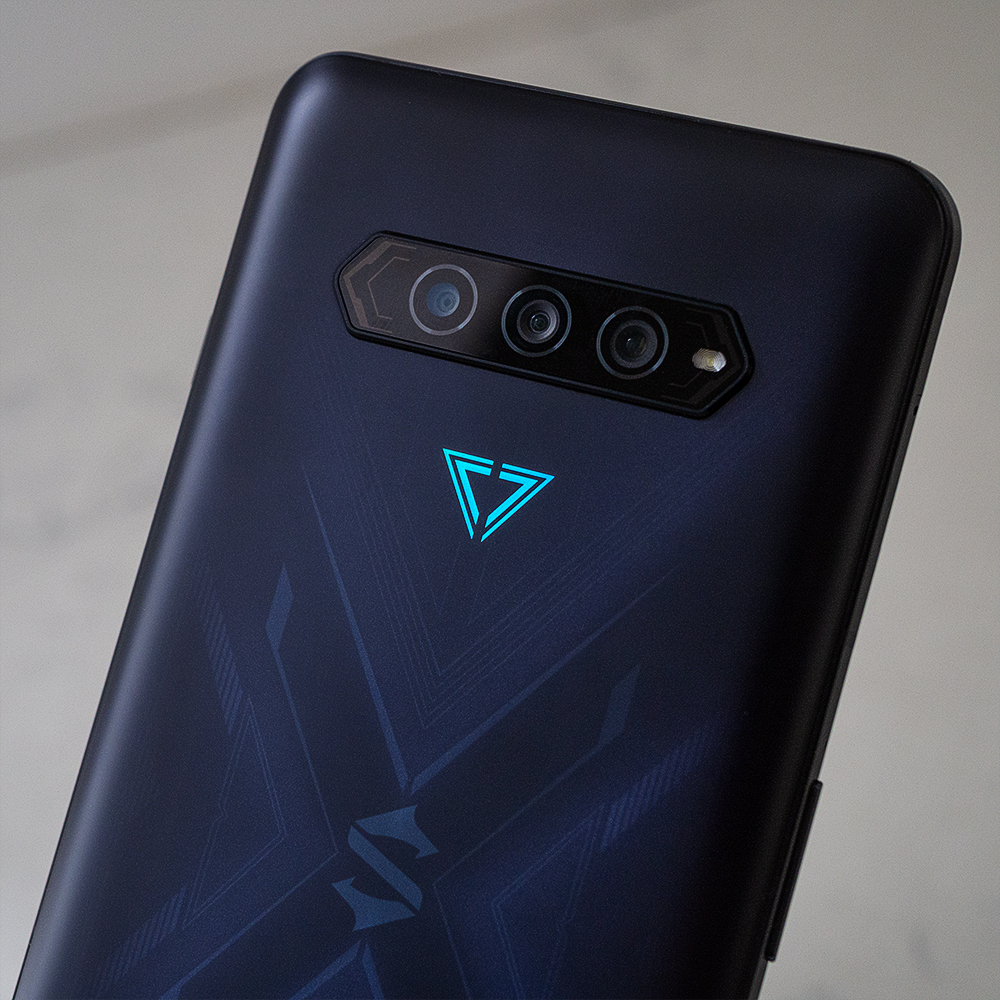 The Black Shark 4 Pro launched in the US for $579.99 back in late February, and it’s one of the more understated-looking gaming phones that I’ve used. Its back has smooth, frosted glass that feels soft to the touch, and it’s generally devoid of flashy design elements that most other brands (including Black Shark’s older phones) rely on to catch the eye of whoever they think these phones will appeal to. I like that about the Black Shark 4 Pro.

It’s also different in terms of one key hardware feature that isn’t available on most other gaming phones: mechanical triggers. Along its right edge, there are two switches that, when toggled, make small button-like triggers sprout from the phone. Whereas many previous gaming phones have relied on invisible ultrasonic touch sensors (that do a surprisingly good job of mimicking the real thing), these have, well, something closer to the real thing. The travel is vastly shorter than triggers that you’d find on controllers, but they’re satisfyingly clicky.

Beyond in-game use, the switches are some of the most fidget-friendly mechanisms that I’ve used in years. Similarly satisfying is this device’s haptics, which provide the punchiest, perfectly delineated blips of vibration that I’ve ever felt on an Android phone. The hardware is, arguably, the only great thing about this phone.

Almost everything else about using this phone matches the ho-hum experience that I’ve had with other gaming phones. It uses JOYUI12 (based on Xiaomi’s MIUI12 twist on Android 11), and at the beating heart of the experience is a gaming dashboard app called Shark Space that acts as a home base for launching games from, tweaking overclock settings, and more. If you already know that games install into the app drawer on Android by default, it can feel like relearning an unnecessarily obtuse way to access your content.

I’m used to gaming phones having some odd touches to their software to match the maximalist approach to hardware design, but this Black Shark phone takes the cake with its built-in “Shark Chan” app. Shark Chan looks like an anime character ripped out of Genshin Impact, with a scantily clad look that leans all the way into being male-gazey. It’s essentially a busty Clippy, and its responsibility is to walk you through the phone’s mind-bogglingly numerous UI elements that can be accessed in-game with a diagonal swipe down from the right corner of the screen while in landscape mode.

It’s helpful that Xiaomi includes a tutorial for using the software, even if it’s all but required due to the added complexity of having so many features. In it, there are toggles that let you take advantage of this phone’s many impressive specs, like its 720Hz touch sampling rate, or a “Ludicrous Mode,” that pushes the specs to their limit. (It suggests that you buy an accessory to help keep the phone cool while this mode is active).

Beyond being where you can adjust settings, Shark Chan can be a virtual butler, of sorts, offering congratulations for charging the phone and nagging you when an alarm goes off.

Xiaomi should have stopped there because Shark Chan has a few other features that are just plain off-putting. I did a double-take when I noticed that the software includes a mention of Shark Chan’s bust, waist, and hip measurements, as if I’m playing a dating sim. There’s also a gallery mode where it wants you to touch Shark Chan’s avatar. It’ll respond with dismissive or bashful responses depending on where you touch it, calling you “commander” with each line. I didn’t want or need a weird attempt at a dating sim meshed with a virtual assistant, and I’m not sure why Xiaomi thought that this would be a good idea.

I’d be willing to overlook some of these shortcomings if there weren’t already other powerful phones on the market. Samsung’s latest Galaxy S22 lineup, for instance, packs a lot of power as well as a 240Hz touch sampling rate. That’s a fraction of the Black Shark 4 Pro’s 720Hz spec, but I’d argue that the tangible difference probably isn’t perceptible to most people. And, at this point, the Snapdragon 8 Gen 1 within the S22 series outpaces the Snapdragon 888 that’s in the 4 Pro. You can have most of the power that you need in a phone that looks far better than this one and works with many more US carriers. The Black Shark 4 Pro won’t work with LTE or 5G networks on most carriers — at least reliably. It’s compatible with a smattering of bands for AT&T and T-Mobile, but it’s not broad support in the slightest.

The Black Shark’s mechanical triggers are a neat idea, though it’s a feature that I’m far less likely to rely on than connecting something affordable, like a Razer Kishi that adds console-like controls to your phone (including USB-C passthrough) or even a DualSense controller connected wirelessly via Bluetooth. If you’re using an iPhone, you should get the excellent Backbone One controller to attach to your phone. To each their own, though. I recognize that there’s an audience of mobile gamers who rely solely on touch controls. And for that one key area, gaming phones like this one can’t be beaten.

At the core, there’s nothing wrong with the concept of gaming phones. They’re thicker than your average flagship phone due to bigger batteries, a heat sink, and several other components that you probably won’t find in phones made by Google, Apple, or Samsung. They’re proofs of concept that you can get laptop-tier specs into a pocket-sized device. If only a company made a device with more focused software that doesn’t feel so pressured to lean (in Black Shark’s case, very awkwardly) into the stereotypical lane of what it thinks a gamer wants in phone software. It’s really not a good look.

For all of the power and high-end tech that’s bundled in gaming phones, they aren’t great all-around picks for people who want great software, boundary-pushing cameras, and a more appealing device around the edges.

Photography by Cameron Faulkner / The Verge