PeopleFun, going on its 11th year, on Wednesday announced Carol Miu as its new CEO, succeeding gaming pioneer Tony Goodman, who founded the company with friends John Boog-Scott and Angelo Laudon. Goodman is retiring, according to Miu.

Miu, 42, has a two-fold vision for the company – product innovation and doing right by the people in her company. She began her role April 19.

“What I want (employees) to be able to do 30 years from now at the end of their careers, I want them to look back and be able to say, ‘I grew the fastest at PeopleFun. They invested the most in me, they believed in me, they trained me and they gave me opportunities that I would not have gotten at my level anywhere else,’” Miu said.

Miu was the first employee on the product team at PeopleFun when she joined the studio in 2018 as a senior director of product management. She later became vice president of product analytics and chief product and analytics officer.

She built a team of product managers, data analysts and user researchers, while helping the game maker triple annual revenue from $100 million in 2018 to over $300 million in 2021.

“I couldn’t be more excited to see Carol appointed as chief executive officer of PeopleFun,” said Goodman, who founded two earlier gaming companies, including the studio that developed the Age of Empires franchise that sold more than 25 million copies. “She brings an extensive knowledge of product, data, and analytics to the role, and also offers a critical understanding of the importance of mentorship alongside an individual’s personal and career growth.”

She joins a select group of women leading U.S. companies. According to the World Economic Forum, about 15% of Fortune 500 companies are led by women. Across the broader Russell 3000 index, only 5.6% were helmed last year by women, according to the Women Business Collaborative’s annual analysis.

Her colleagues see her as the right leader for the job.

“I know that as CEO, she will encourage and challenge her teams to push the boundaries of creativity, while also continuing to prioritize people’s growth as she’s done so extraordinarily over the past four years,” Boog-Scott said in a statement.

PeopleFun games have 30 million monthly active users across 248 countries. In 2018, PeopleFun was acquired by AppLovin and became a leading studio in the company. The company has 100 employees. 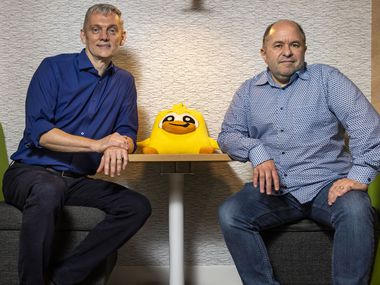