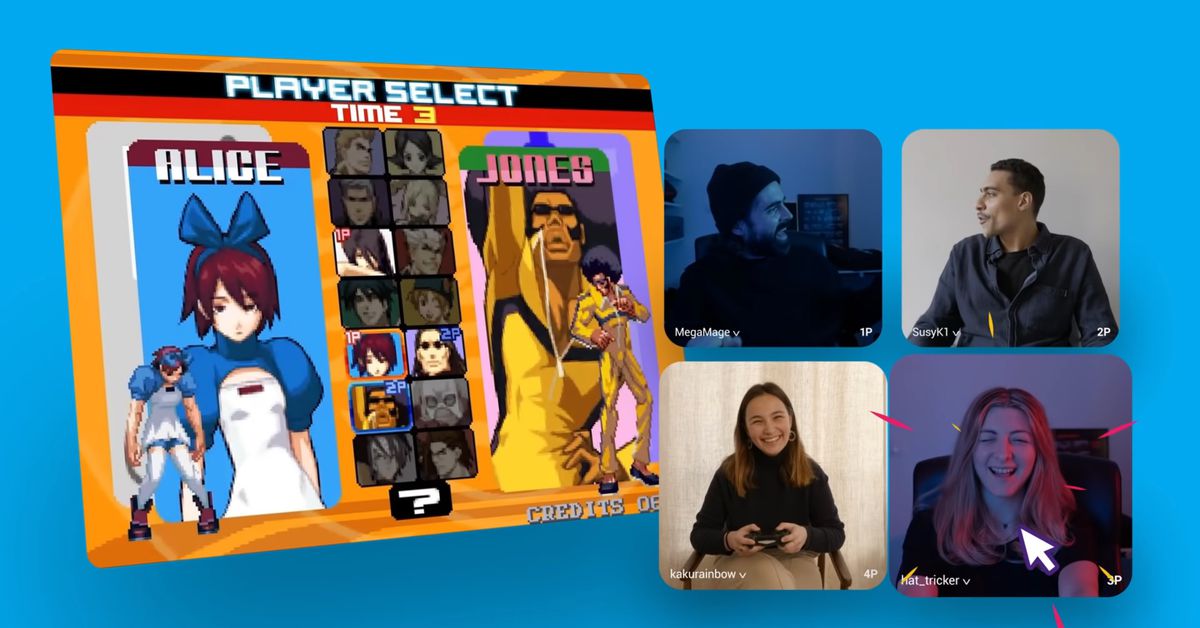 I discovered the retro cloud gaming service Piepacker the way it was probably meant to be discovered: not through a press release in my inbox or a pitch from someone in public relations, but when a friend mentioned it in a WhatsApp group and invited me to play. I’d never heard of it, and the name sounded silly, but my friend said it had some cool old SNK games available to play. I watched the video on the website and it looked fun.

The pitch is very simple: classic games, playable instantly in your browser, with — and this is the important part — multiplayer enabled and integrated video chat. It’s cloud gaming and a virtual hangout rolled into one, it’s free to play, and inviting a friend is as easy as pinging them a link.

A few things struck me as instantly appealing about this concept. The immediacy, of course, is something that all cloud gaming services share. But the social element seemed important too, as did the way this resonated with the games on the service, which are largely local multiplayer games from arcades or from old home consoles: simple, direct games that are designed to be played with someone right next to you. Piepacker, with its prominent video chat and easy game-switching, puts the social experience before the games themselves. It creates an online space for relaxed, chatty, informal gaming sessions with friends — and, almost as a byproduct of this, it gets a lot closer to the original multiplayer experience of some of these old games than even online-enabled reissues can. It’s a couch in the cloud.

The lineup of games isn’t stellar, to be honest; you won’t find anything from the heydays of Capcom, Sega, Konami, or Midway here. There are a handful of true gems, like Metal Slug X, Windjammers, and King of Fighters ’98, while a deal with veteran UK outfit Team 17 has brought a few vintage Britsoft social-gaming classics like Worms World Party and Sensible Soccer. Piepacker has also experimented with developing and publishing new indie titles for the platform, including the Bomberman-style Arsène Bomber.

But this isn’t really the point. The fun of Piepacker, once you’re in and chatting, is to poke around its archive and try some of the random esoterica you might find there, such as the extremely fun Neo Geo fighter Real Bout Fatal Fury, or the modern NES game Micro Mages, or the entertainingly dumb zombie brawler Night Slashers. Because you’re with friends, it can even be fun to play something as objectively terrible as the PlayStation kart racer SCARS for a few minutes. As a rule, on Piepacker, the more mindless the game, the more easily conversation will flow — so you don’t necessarily want to be too engaged anyway.

The fun of Piepacker, once you’re in and chatting, is to poke around its archive

Piepacker has yet to really make a name for itself, although it has attracted support from the retro community with a successful Kickstarter campaign, as well as investment from the Lego Group, among others. It’s not necessarily the future, but whether it succeeds or not, there is something there: a different way to conceive of cloud gaming, contrasting with the high-tech approach of the likes of Google Stadia and Xbox Cloud Gaming.

“When I was a kid, I used to have the Game Boy, and I was dreaming about another device, which was the Game Gear by Sega,” co-founder and CEO Benjamin Devienne says over Zoom from Bordeaux in Southwestern France. Devienne is a handsome, enthusiastic entrepreneur type, and he’s about to invoke the legendary Nintendo engineer Gunpei Yokoi’s “lateral thinking with withered technology” approach to explain the thinking behind Piepacker.

“The contrast between these two handheld devices was very interesting,” says Devienne. “The Game Gear was arguably better with, you know, color screen, better sound chip, maybe better games. But the problem was, it was more expensive. Also you needed a lot of batteries to go through the day. On the other side, the Game Boy was much lower tech, like, black-and-white screen, pretty bad sound, and you could barely see what was happening on the screen. But it was cheaper, and the battery was much more robust.

“In hindsight, [Nintendo] won this battle with accessibility and low tech. And when we started to look at the cloud gaming space, we were like, Hey, every service is awesome, like Google Stadia, PlayStation Now, but they’re designed for a world where you have fiber, where it’s 4K, 60 frames per second. This is a world where you have a lot of Game Gears, and we’re like, Hey, can we build the first Game Boy of the cloud gaming space — something that is much lower tech, but with a much lower footprint?”

The result is a cloud gaming service that uses 60 times less bandwidth than Google Stadia. That’s good news for Piepacker, lowering its costs considerably and making its free-to-play business model possible. It’s good news for the environment — cloud gaming services that require high bandwidth and lots of computing power at the server end can be very energy-intensive over long play sessions, as Eurogamer has reported. And it’s great news for users who have less than stellar internet service at home, whether that’s in Southwest France (“We have good wine and cheese, but bad internet!” quips Devienne) or in emerging markets like Brazil, India, Southeast Asia, and North Africa, where infrastructure is still catching up.

Part of Piepacker’s leanness is in its proprietary technology (which is also where it gets its curious, and soon to be changed, name: “packing” is a way of compressing processes on a server to use less bandwidth, and the processes that Devienne and his co-founder were using to experiment with this technology happened to be called “pies”). Part of it is in its philosophy, where visual fidelity can take a back seat to the social interactions that are the real draw; competing with the home console experience is not the point. And part of it is the choice of retro games, which are of course technologically undemanding and much easier to optimize around.

Retro is where Piepacker has established its niche so far, but for Devienne, it has been a means to an end for getting the service off the ground. He’s not interested in creating a licensing-based retro streaming catalog like Antstream’s (which has a much deeper game selection than Piepacker, but lacks its social features). There’s no intention to start charging a subscription or anything of the sort. Rather, Devienne is hoping to host more modern indie titles and turn Piepacker into a marketplace where developers can monetize their games how they like (with Piepacker taking a cut, of course). He suggests Team 17’s frantic co-op cooking game Overcooked as an example of a title that would work exceptionally well on Piepacker, and he’s right — but Stadia has shown players might be unwilling to pay to own games only in the cloud.

In the meantime, Piepacker is making decent money selling custom 3D filters for its video chat windows. (Devienne used to do analysis and research for Facebook and Twitch, and as such he’s unfazed that players are willing to spend up to $1,500 on animated virtual masks.) Further off in the future, there’s also a scheme for Twitch integration that will allow viewers to pay to jump into streamers’ games if they’re hosted on Piepacker, with streamers taking 70% of the revenue and Piepacker the rest.

“Something that really blew my mind when I was at Twitch was Twitch Plays Pokémon,” he says. “I was like, why is nobody doing games that use this kind of mechanic where we can involve the viewers? We should make one!” That’s where Arsène Bomber started out, as a prototype that allowed viewers of a charity stream on Twitch to vote to control a UFO that could disrupt the Bomberman-style action. He imagines viewers paying to challenge their favorite streamer at Street Fighter, or to influence a single-player game with items, cheats, or extra enemies, in the same way they tip streamers now.

It all comes back to human connection

It all comes back to human connection. Before Piepacker had video chat, Devienne noticed in an early test that almost all players had Zoom or Hangouts open at the same time. When the feature was integrated, habits changed. “We realized that people started to consume games very differently than they consume games on other platforms. For instance, 70% of the time, they touch the gamepad, but 30% of the time, they don’t touch anything. They just chat. To me, Piepacker resembles a lot the kind of experience you have when you invite friends, you’re around the table playing, like, a board game or D&D, and the game almost becomes an excuse [for] conversation. It’s, you know, a way to connect with other people.” He wondered if players were returning to the service for the games or for their friends, so in another test, he isolated groups and started removing the availability of the games they liked best to see if they would keep coming back. They did.

None of this is to say that Piepacker is bound to become a profitable, mass-market platform. But what it does is demonstrate, quite clearly, the potential of cloud gaming to differ from or expand the gaming experiences we know, rather than just provide a convenient way to access them. (Google Stadia had a more grandiose version of this idea, but with the closure of its first-party development studios, it seems we won’t get to see that future realized.) Devienne and his team have zeroed in on the social potential of cloud gaming, and it’s a lesson the bigger cloud players would do well to pay attention to.