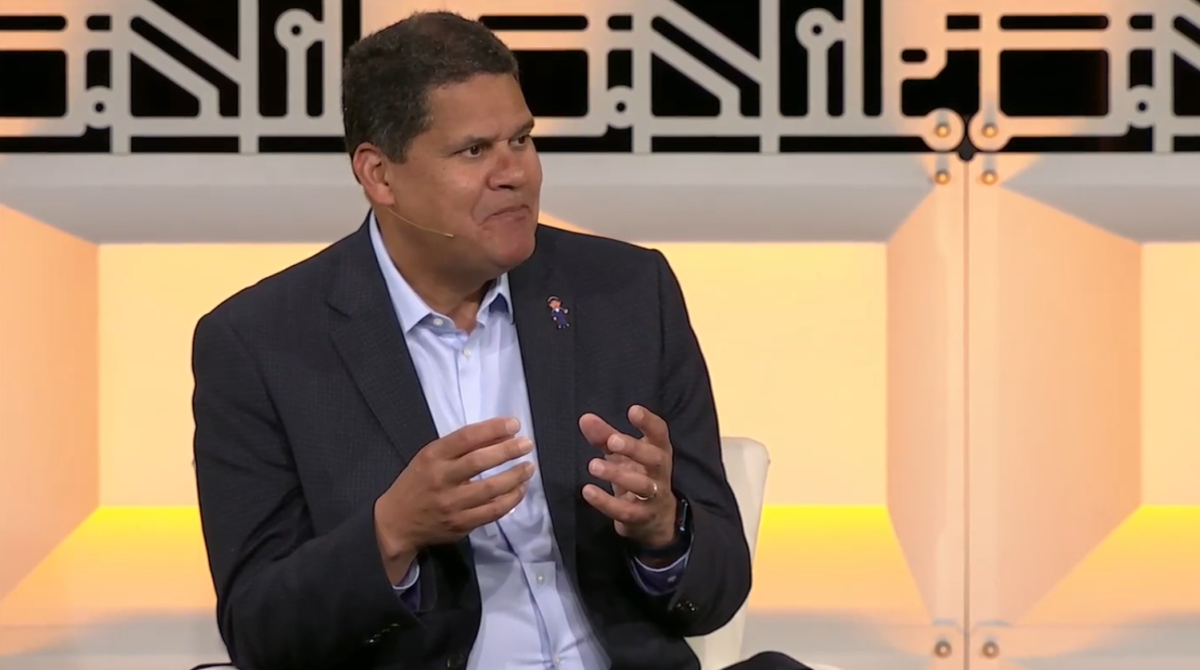 GamesBeat Summit 2022 returns with its largest event for leaders in gaming on April 26-28th. Reserve your spot here!

In our keynote session for GamesBeat Summit 2022, former Nintendo of America president Reggie Fils-Aimé spoke with moderator Danny Peña about the disruptions happening in the gaming industry.

Fils-Aimé has an autobiography, Disrupting the Game: From the Bronx to the Top of Nintendo, coming out on May 3. It aims to tell his story, his non-linear career path, in a way that can give lessons to everyone.

“The way we learn is by analyzing our failures and applying those lessons moving forward,” he said. While Fils-Aimé was at Nintendo, he oversaw some big successes. But he was also there for the Wii U, Nintendo’s lowest-selling home console. However, Nintendo used those lessons to create the Switch.

He also brought up the launch price of the Nintendo 3DS, $250, as another tough lesson for Nintendo. At that price, only core Nintendo fans bought the device. Nintendo had to lower the cost to $170 to reach a larger audience.

Fils-Aimé and Nintendo gained a lot of wisdom from those missteps. Peña asked him if he had any wisdom to share with Nintendo’s main rivals.

“Personally, I think that Game Pass is a really innovative idea,” Fils-Aimé said, although he noted that Microsoft needs to improve its messaging about the service. PlayStation, according to Fils-Aimé, needs to fix its supply issues.

Reggie on the metaverse and NFTs

“To me, metaverse is digital, immersive, a place that has persistence in execution. There’s a common currency. There’s a wide range of different developers creating content for this,” Fils-Aimé said, noting it can take place in VR or not, and that player avatars need to have some kind of value. He points out that Roblox and Fortnite already have a lot of these qualities.

He is bullish on that definition of the metaverse, although he’s not on board with Meta’s approach. He describes the company as more of a follower and less of an innovator. He believes that making a true metaverse will require cooperation and partnership.

He also declared himself bullish on NFTs and blockchain. He explained that he played a lot of Animal Crossing: New Horizons, but he hasn’t played in awhile. He’d enjoy a way to monetize his island. “It needs to be done thoughtfully,” Fils-Aimé said.

The industry is seeing most of its disruption outside of NFTs and the metaverse, especially with mergers and acquisitions.

Fils-Aimé notes that the purchase of Bungie will help Sony in the live services sector. He believes that Microsoft’s acquisition of Activision Blizzard from a brilliant financial play, although it remains to be seen how Microsoft incorporates such a large entity.

He also believes that there will be an exodus of developers, looking for more creative ideas, from all these mergers and acquisitions. These will create a new wave of independent and smaller studios.

Then there’s Valve’s new handheld machine, which itself is similar to the Switch. Fils-Aimé finds the Steam Deck interesting, although he believes that it is overpriced for what it is, prohibiting it from becoming mainstream. But the idea of a portable PC gaming machine is compelling, and Valve is on a track to find success.

We’re also all adjusting to in-person events becoming a reality again, although E3 is sitting this year out.

“E3 really has been on its own journey,” Fils-Aimé noted. When he went to his first E3 with Nintendo in 2004, he noted that it was much more an industry event. At his last E3 in 2018 it turned into more of a consumer show. He expects E3 to evolve in the future, and he believes that Geoff Keighley will pick up the slack this year with Summer Game Fest.

Nintendo itself got into the digital showcase game early, but Fils-Aimé still believes that it is important to get games into fans’ hands before they launch. “I believe you can do both,” he noted.

GamesBeat’s creed when covering the game industry is “where passion meets business.” What does this mean? We want to tell you how the news matters to you — not just as a decision-maker at a game studio, but also as a fan of games. Whether you read our articles, listen to our podcasts, or watch our videos, GamesBeat will help you learn about the industry and enjoy engaging with it. Learn more about membership.